Unknown
The Opinacz (loosely translated as Overlappers/Leggings/Gaiters) is a combat boot of Polish origin. It was actually just a slight modification of already existing model, the Opinacz wz. 58 (wzór 1958), and it firstly appeared already during late 1960s. The most noticeable changes when compared to the original model are disappearnace of distinctive toe cap, then redesigned sole (however, still retaining the usual renforcement screws underneath, only less) and slightly different buckles and color of leather.

Due to those few mentioned changes to the cut, it thus received new, simplified designation, the Opinacz. As mentioned, it was being produced already from late 1960s until the very end of production of the model in early 1990s, making it far the most common and produced variant of LWP - Ludowe Wojsko Polskie (Polish People's Army/PPA) combat boots (~25 years of production), since the original wz. 58 are very rare today due to being in production for only first few years and due to quickly being replaced in usage with appearance of newer models. [2][3][4][5][6]

In contrast to the mentioned original model (wz. 58), the Opinacz actually existed in two main variants, the presented brown leather and the classic black leather one. The brown one was formally being made to be used only for branch of WL - Wojska Lądowe (Land forces), while the black one was made for branches of MW - Marynarka Wojenna (Navy) and SP - Siły Powietrzne (Air force) of PPA, although the black models could also be sometimes spotted among the land forces as well as vice versa. There was also a special and slightly different model made only for marines operating on landing crafts and amphibious vehicles, which featured ten holes for laces (two less at the upper end) and slightly different (somewhat larger) buckles.

The Opinacz were being used until the very end of Polish People's Republic and its Army along with it, but were actually made as far as 1993, that is, even slightly longer after fall of the Eastern bloc and were thus, along with their Yugoslavian counterpart, one of the most produced combat boots in history, reaching 35 years of full production (1958-1993) - if counting the original wz. 58 along with them. Also, PPA was one of rarer armies which almost exclusively used only one and the same type of combat boots during its whole existence and for such relatively long period. As in all other post-Eastern bloc countires, they were replaced with classic all-out laces boots in 1990s, in this case with Trzewiki wz. 919/MON, which were adopted as standard combat boot in newly formed Wojsko Polskie - WP (Polish Army) in 1993, although those were, for first few years, worn exclusively by paratroopers, due to which they are often somewhat confusingly nicknamed Desanty (~Landing boots). 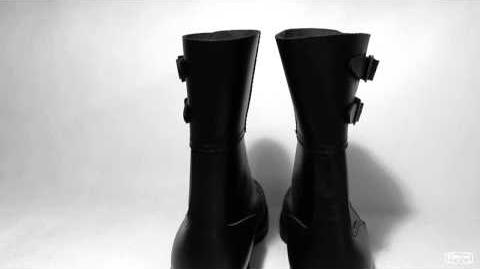