The Spetsnaz Boots are made of yuft. They have ten eyelets and unlike the later version lack a proper heel cap, instead they have only a strip going up in the rear. The most distinctive features of the boots are the unique porous rubber soles and the narrow toes lacking any toe caps or seams. The tongues are not completely sewn to the boots. They also have supplementary special insoles for divers.

They were introduced in 1973 under the GOST designation ГОСТ 19137-73 and likely developed from the Hot Weather Boots. There were two main variants, one for the navy and one for army (land forces).[4] The 1973 boots were used by Spetsnaz paratrooper units and saw service in the Soviet–Afghan War. 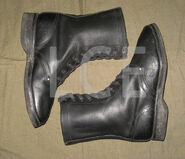 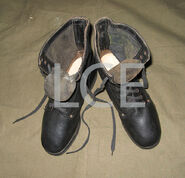 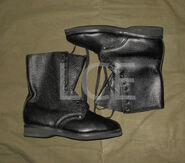 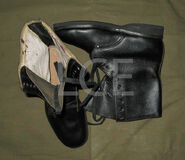 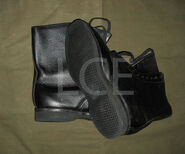 Markings of the 1978 boot, the interior is lined with white leather

Perforation with the year of manufacture "1978"

Markings of the 1989 version

All models of Spetsnaz paratrooper boots[5]